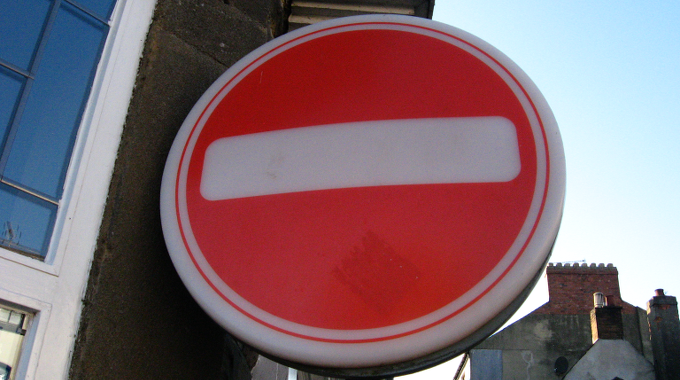 Organizations acknowledge the need to innovate, but may be conditioned to the familiar and resist change.  What’s an innovator to do?

We’ve all been there. You’re pitching an idea you think will do important things, and find yourself challenged by someone whose conception of discussion is to focus on the soft places at the fringe of your argument. While you advocate experimenting with a new idea, they focus on what might go wrong. It can rattle your optimism, and test the courage of your convictions.

In the advocacy for new ideas, optimism and courage are fraternal twins. But first, let’s talk about fear.

Fear comes from many places, rational and irrational. When we watch an idea die on the vine because of one influential senior guy, we may be watching a great risk manager in action. Or we may be watching the expression of a fear of change — fear for the old rules, maybe, that brought that senior guy success. Fear can be infectious, and a terrible distortion to decision making.

Established organizations, the kind in which the Daily Innovator is likely to work, are in the paradoxical position of acknowledging the need for innovation, while at the same time remaining conditioned to the familiar. That can manifest itself as resistance to the new, draining the Daily Innovator’s reserves of optimism. Just to get agreement, she may cave on central elements of her argument. Or she may lose perspective on which elements really are make or break, and fall on her sword to no purpose. She can feel beaten.

Daily Innovators have a career stake in beating back fear and feeding optimism, both for their own sake, and as a means of enlisting colleagues in the cause of an idea. Here are 10 concrete steps for doing that.

By definition, anyone promoting a new idea is pressing against the boundary of what makes people comfortable. It would be surprising if the person doing the pressing didn’t feel uncomfortable too. The majority of the world is working in the here and now, on what is. The Daily Innovator is working both on what is, and on what can be. Some tension is inevitable.

Begin with your strengths: What are you certain about? Acknowledge the pressure in established organizations to accept what might be an unspoken view of the world, which is possibly a phantom source of resistance. If you can, name this unspoken worldview and get it out in the open. Argue for your idea, not against the worldview. Be positive, be a good listener, be consultative. But remember that if you listen to everything everyone says, you end up with the lowest common denominator, diluting your great idea. Winning support for something genuinely new, will almost never be about attaining consensus.

At the core of the professional code, to which most of us subscribe, is that we must never show weakness. You and everyone else are expected to know what you’re doing. Innovators with the courage to acknowledge uncertainty and seek advice demonstrate professional maturity, the mark of authentic confidence.

Sigmund Freud liked to tell his patients: “Make it external.” In other words, express your thoughts and see how they sound to you. Keep an ideas journal, which will push you to greater clarity and provide a rehearsal for persuading an audience. Telling others deepens your conviction. Begin with a friendly audience — your external network, say, or close colleagues. Even if their response suggests your idea is not ready for prime time, the worst that happens is you’ve shown allies you want their guidance, stimulating their desire to be helpful.

5. Who do you need to persuade?

Know your audiences and adjust to each. Do it explicitly, writing down what each needs to be successful. Don’t lose sight of the “WIFM” principle: What’s In It For Me? Define the WIFM for each audience. What are their individual demeanors, and what’s your strategy for working with them, whether formally or informally? Some people appear to be naturals at this. More likely, the appearance of having an answer for every pushback is the consequence of preparation. Love him or hate him, one of the great natural influencers of our era was Bill Clinton, and all his life he kept a growing stack of index cards, sizing up everyone he met whom he might one day need in his corner.

People outside your organization are especially helpful in this regard. An external network gets you out of the closed ecosystem of organizational norms. It can validate that you’re not crazy, with all that means for building optimism and sustaining courage. Most people think a network is something to build only when they’re looking for a job or trying to sell something. For the Daily Innovator, the network should be a personal advisory board, a team of insightful people who can coach and stress test ideas. If you don’t have a network like that in your life, build one.

Obstacles might be put in two categories: the antagonists and the indifferent. Antagonists can range from skeptics to outright bullies. The Daily Innovator can work with the skeptics, but should ignore the bullies. Their negative energy will only wear down the innovator’s optimism. The indifferent are in some ways harder to crack, since they don’t announce themselves. Demonstrate to them that you know the business, and respect the demands it makes on them. That begins a dialogue about the WIFM of a new idea, which can only feed optimism.

Like the admission of doubt, asking for feedback is an act of courage, an acknowledgment that you’re not omnipotent. If you’re ever feeling stressed about, say, a pitch meeting ask yourself: “What would success look like?” Imagine that it’s the day after the meeting, and everything went well. The lift to your optimism will be immediate. Work backward from that to identify what you need to do now to achieve this future state, where your idea is alive and beginning to get legs.

Remember this: The Daily Innovator lives in a world of scarce resources. Personal energy and enthusiasm can compensate for a lot of missing formal support. Don’t allow them to be eroded by setbacks. Keep the focus on your goal, and not on moment-to-moment swings in your emotions. It’s surprising how helpful even small, self-created moments like short meditations can be, or visual reminders, like a sign on your desk.

Behave optimistically even when you aren’t feeling it. It’s a cognitive trick that primes your brain for confidence, for courage, and will itself generate the energy you need to deliver your vision. The portrayal physically makes you feel better, and allows the full-bloomed emotion to take root. And it is motivating to the people you want on your side.